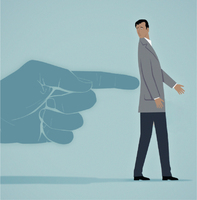 Government, Big Tech and the media are all trying to nudge us into adopting the 'right' behaviour. When we think of oppressive regimes, we immediately think of the Stalinist model portrayed in Orwell's Nineteen Eighty-Four, the heavy-handed thought control associated with Hitler's Reich or Mao's China. But where the old propaganda was loud, crude and often lethal, the contemporary style of thought control takes the form of a gentle nudging towards orthodoxy - a gentle push that gradually closes off one's critical faculties and leads one to comply with gently given directives.