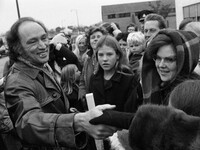 There's an ongoing campaign by sovereigntists in Quebec to remove former prime minister Pierre Elliott Trudeau's name from Montreal's airport, arguing he oppressed Quebecers. They want the Montreal-Trudeau International Airport renamed to honour, Rene Levesque, the late separatist premier of Quebec. Predictably, Prime Minister Justin Trudeau's government has rejected changing the name of the airport honouring the late father of Justin Trudeau. The irony, however, is that Justin Trudeau and the Liberals have encouraged the mentality of people who believe in cancelling out the past.