Our world changed forever on September 11, 2001. For the first time, America was faced with a massive terrorist attack on their home soil that claimed thousands of lives. Americans realized that terrorism was no longer an isolated plane hijacking, or something that happened overseas. It was a clear threat to their everyday lives. We stand with America for their strength is the defence of the entire free world.

Now, more than 32,000 documented terrorist attacks have occurred worldwide since that awful day. ACT! For Canada is dedicated to the prevention of terrorism through education, empowerment and engagement. We are dedicated to giving all Canadians - policy makers, law enforcement, activists, educators, and the general public - the tools they need to make our country more secure. 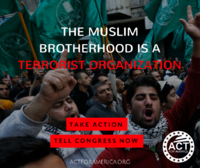 The Muslim Brotherhood, founded in 1928 in Egypt, is a militant, pro-sharia law organization that has used both violent and non-violent means to achieve its ultimate goal of restoring the Muslim caliphate and the glory of the Islamic empire.

The Muslim Brotherhood (Al-Ihkwan al-Muslimun) has emerged over the past century as one of the world's leading Islamist organizations.

They are responsible for creating "The Project", which is an eighteen-page comprehensive plan that charts the groundwork of jihadists for establishing an Islamic government in North America.

They have spawned dozens and dozens of organizations across the globe, including the terrorist organizations al Qaeda and Hamas. Today, numerous Muslim organizations in America are either actively connected to the Muslim Brotherhood or owe their existence to the jihadist group.

The Islamic State (ISIS) is the strongest, most ferocious, best funded terrorist organization in the world today. The Islamic State now has a presence in over a dozen countries ruling over roughly 10 million citizens.

They are a Sunni Salafist jihadist group of global reach. While its base of operations is in eastern Syria and western and northern Iraq, it has supporters and fighters from North America, Europe, Russia, Africa, Asia, the Pacific Rim and Australia. In its self-proclaimed status as a caliphate, it claims religious authority over all Muslims across the world and aspires to bring all of the Muslim-inhabited regions of the world under its political control, beginning with Iraq, Syria and other territory in the Levant region, which includes Jordan, Israel, Lebanon, Cyprus, and part of southern Turkey. But it also has specifically claimed that it seeks to reconquer parts of Europe, including all of Spain and Portugal, parts of France, Italy and Austria, and all of the Balkans and Greece.

I.S. has been designated as a terrorist organization by the United States, the United Kingdom, Australia, Canada, Indonesia and Saudi Arabia, and has been described by the United Nations and Western and Middle Eastern media as a terrorist group. The United Nations has accused the Islamic State of committing "mass atrocities" and war crimes, and Amnesty International has accused it of ethnic cleansing against minorities in northern Iraq.

EMP's can be man-made or of solar origin. An enemy could explode a nuclear weapon hundreds of miles in the atmosphere over the continental U.S. Any circuitry in a direct line of sight from the detonation could be taken out through this pulse. A massive solar flare -- an occurrence happening every 150 years on average throughout the earth's history -- could also have the same impact on our fragile electrical circuitries.

Imagine life with no cell phones, municipal power, water or sewer. No vehicles would run that depend on an on-board computer. Within days, millions would be without food or water. The "math" at this point isn't kind. Some estimates have the death rate in large urban areas as high as 90% within one year under such a scenario.

The good news is that the U.S. electrical grid could be hardened against such damage for much less than the costs of ignoring the problem. Most of the nation's elaborate infrastructures are completely reliant on electrical power. Without it, we are in a world of hurt.

Aids local municipalities burdened by having to deal with refugee resettlement into their communities when the resettlement is beyond the local community's ability to provide the necessary infrastructure for additional people.