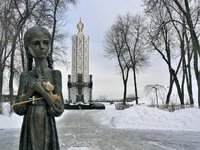 The Holodomor. Today we honor the memory of the innocent victims of one of the greatest tragedies in the history of the Ukrainian people - the Holodomor of 1932-1933. This crime of the Soviet government is one of the most brutal and large-scale crimes against humanity of the 20th century. The was a famine genocide deliberately inflicted on Ukrainian people in 1932 and 1933 by Bolshevik Communist, Joseph Stalin.

The National Museum of the Holodomor Genocide is a center of commemoration of more than 7 million Ukrainians (victims of the Stalinist genocidal famine of 1932-33) can be viewed online here: