Which kills more: ideology or religion?

In 1971 DDT was poised to rid the world of malaria. In 1972 it was banned. The ban, decided in the USA by William Ruckelshaus, an administrator of the Environmental Protection Agency, was a travesty. Ruckelshaus ignored the massive evidence that DDT was not harmful to man or wildlife and refused to give reasons for the ban. It was purely ideological. This was the time of Rachel Carson's mendacious book Silent Spring, about the horrors of pesticides, when the newly emerging green ideology was looking for a cause célèbre.

Study after study has shown that DDT, even when abused, as it certainly was, did not cause cancer or serious disease in humans, did not harm bald eagles or peregrine falcons, and did not cause eggshell thinning. None of this mattered. The greens, leaning heavily on Ruckelshaus, were determined to ban it and did so, with catastrophic consequences for poor people with dark skins. Tens of millions of humans were sacrificed on the green altar. 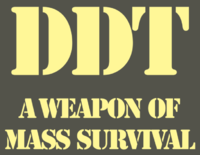