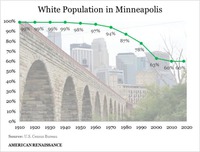 Minneapolis, Minnesota, was almost entirely white until 1980. However, in the last few decades, large numbers of non-whites came to the city, especially immigrants from Somalia. Now, the idyllic city created by settlers and pioneers is a center for black crime and Islamic terrorist recruitment . . .

Non-whites started coming to the city in large numbers in the 1970s and 1980s. By 1990, the city was more than 20 percent non-white. Some migrants may have been tempted by Minnesota's generous welfare programs. However, there was also a deliberate effort by churches and refugee settlement organizations to bring them. Corporations also wanted cheap labor, such as the meat packers who hired Somalis . . .