How The Left Projects Its Own Racism Onto The Right 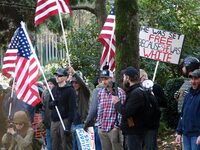 Let me start by acknowledging the obvious: racism is bad. The game isn't silly because the response is wrong; people on the left really are racist. Of course I am generalizing, but it isn't far off. Does anyone on the left not embrace identity politics, which is about judging people by their group identity as defined by race, sex, and queerness? This seems pretty racist by any textbook definition of racism.