Did a Military Experimental Vaccine in 1918 Kill 50-100 Million People And Call It “Spanish Flu”? 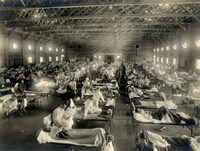 What if, instead, the killer infection was neither a flu nor Spanish in origin?

Newly analyzed documents reveal that the "Spanish Flu" may have been a military vaccine experiment gone awry.

In looking back on the 100th anniversary of the end of World War I, we need to delve deeper to solve this mystery. And would you believe it - a man named GATES (Frederick Gates) was at the forefront of developing this killer vaccine in 1918.