Camille Paglia and the Consciousness-Light Day of Western Man 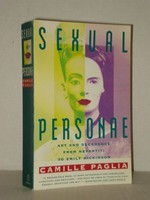 Despite these acute observations, and her almost singular attribution of cultural "greatness" to western civilization, Paglia's declaratory statements are always about the biological differences between males and females as such. "All the genres of philosophy, science, high art, athletics, and politics were invented by men". She knows that "everything great in western civilization has come from a struggle against our origins" in nature, against the "mother-cult", and she knows that only western man refused to reconcile with nature, however impossible it is to escape nature. But her intellectual struggle was directly against the feminist refusal to accept biological differences between the sexes, so she framed her thesis statement in gender terms, rather than in ethnic terms, along with her own sympathies for multiculturalism. In our current times when academics are dedicated to the replacement of white culture with diversity, we must be upfront in stating that the incipient argument in Paglia is about the uniquely Apollonian will-to-power of white males.